Skip to content
First published on 13.03.2018
This resource has been tagged as an In the Media 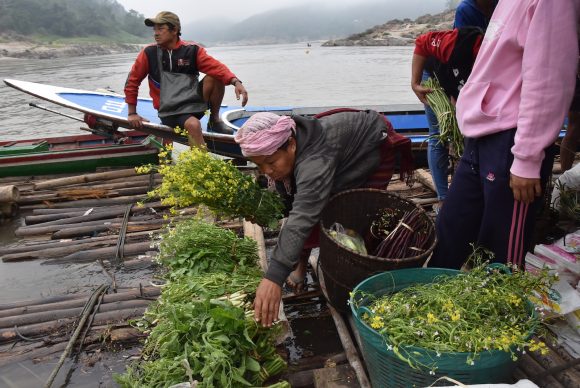 Busy morning on the Salween on the Thailand-Myanmar border as women sell their products from riverbank gardens.
International Rivers

This article originally appeared in the Asia Times.

A strategic Environmental Assessment on the hydropower sector in Myanmar – led by the International Finance Corporation (IFC) together with the Myanmar government – will make its final recommendations in coming weeks. Asia Times is publishing this article on March 8, International Women’s Day, to highlight a recent trip to the Salween River as a reminder that women’s voices must be central to decision-making processes on the role of hydropower and in broader energy planning for Myanmar and the region.

The raft houses at Ban Sob Moei village, situated in Thailand at the confluence of the Salween and its tributary along the Thai-Myanmar border, were bustling in the early morning during a visit by this writer last month. Female Karen gardeners came with baskets brimming with various kinds of fresh vegetables. In less than an hour, each of the women had already earned at least 200-300 Thai baht (about 8,000-12,000 Myanmar kyat, or US$6.40-$9.60), approximately the minimum daily wage in Thailand.

“We grow lots of plants here, such as watermelon, lettuce, eggplants, tobacco and more, for our own family to eat as well as for sale,” a 68-year-old woman said.

For generations, the Karen have lived along the Salween River. Villagers, especially women and elders, have utilized land along the riverbank for gardens, maximizing the nutrient-rich soils needed to support dry-season agriculture. This is made possible by the continued free flow of the Salween River, one of the last remaining free-flowing large rivers in the world.

The transboundary river is known as the Salawin in Thai, the Thanlwin in Burmese, and the Nujiang in Chinese.

For decades, the Salween River has been a target for the hydropower industry. State and private-sector companies from China and Thailand have played an active role in pushing plans for the construction of large dams. Seven dam projects are proposed for the Salween’s mainstream in Myanmar, including the Mong Ton, Ywathit, and Hat Gyi dams.

Plans for the dam cascade have been made in secrecy, with no participation from affected communities, many of whom have been forced to flee their traditional homelands in the Salween basin in Myanmar because of armed conflict over the past few decades.

Over the past year and a half, the IFC – the World Bank’s private-sector lending arm – has been undertaking a Strategic Environmental Assessment (SEA) of the hydropower sector in Myanmar. At a “stakeholder discussion” in Yangon in late February, a draft discussion paper was circulated, outlining recommendations from the SEA. It proposed mainstream reservation for four of Myanmar’s major rivers, including the Salween and the Irrawaddy.

The assessment notes that the mainstreams of these rivers should be preserved from hydropower-dam construction because of major concerns over environmental impacts, including drastic changes to seasonal flow regimes and blocked fish migration. While this is a welcome proposal for many, the draft assessment also proposes to prioritize cascade hydropower in selected sub-basins deemed lower risk based on their biophysical features. These include the Nam Teng and the Pawn in the Salween basin, located in Shan and Karenni states.

However, the proposal to dam the tributaries worries many who work in the field. This includes women, whose concerns are often overlooked. The impacts of hydropower and other large infrastructure projects can disproportionately affect women, and rural, ethnic and indigenous women in particular. Despite this, gender-specific impacts of dams tend to be systematically disregarded in the designs of consultations and assessments, which lack reference to basics such as disaggregated data or more specific identification of gender-related issues and vulnerabilities.

A female Shan activist expressed deep concern regarding both historic and ongoing human-rights violations in the Nam Teng and Pawn sub-basins, where armed conflicts continue to be active. “These plans are in war-torn corners of the Salween, especially in Shan state, where some 300,000 villagers were uprooted from their homes during mass forced relocation by the Burmese Army in 1996-1999.”

This is the same area covered in a groundbreaking report by Shan rights groups, “License to Rape,” released in 2002. The report documented atrocities perpetrated on women during the conflict between the Tatmadaw (Myanmar military) and Shan armed groups. The report provided clear evidence that rape was officially condoned as a “weapon of war” against civilian populations in Shan state.

“Women in the area suffered extensive human-rights violations, and the legacy of this is still there,” the Shan activist said.

Many women from the Salween and Nam Teng were forcibly displaced during the decades of fighting. Thousands who fled their homes – and the country – remain in Thailand or elsewhere, yet still hope to return to their homelands, including sites targeted for dam reservoirs. These women and their families have not been consulted in the planning processes for hydropower dams in the Salween Basin.

The extent to which the legacy of conflict will inform recommendations in the final SEA report on future hydropower development in these war-torn areas remains unclear. There are also major concerns from civil-society groups that building large dams or other infrastructure projects will reignite or escalate conflict in the struggles for control over decisions on land and natural resources.

Moreover, experience shows that the construction of hydropower dams includes heightened risks of sexual and other violence and exploitation of women, especially those in local communities near dam sites, as large numbers of male construction workers move into the area and armed guards are employed to secure the site. This can also increase risks of sexually transmitted diseases, including HIV/AIDs.

Many women of the Salween have fled their homelands in the face of violence and abuse. This situation is likely to be exacerbated if hydropower is promoted on their rivers. Women, like all other groups in society, deserve safety and security in their lives and nothing less. They deserve to have their rights upheld and advanced. This can only be possible if they are meaningfully included in decision-making around the future of their rivers.

Pianporn Deetes is the Thailand and Burma Campaigns Director at International Rivers.