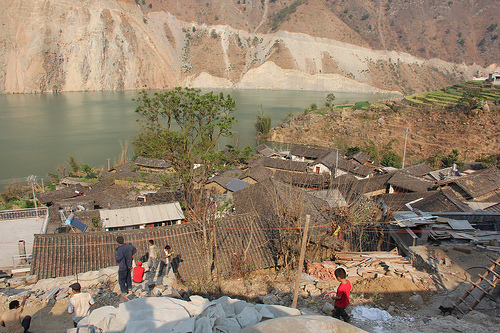 – Below is a guest blog by Songqiao Yao, China program consultant for International Rivers, describing her March 2013 trip to the Lower Lancang River. You can read about her trip to the Upper Lancang in October 2012 here.

“Now we can still sell some vegetables and feed ourselves, but how are we going to live without land?”

Those were the words spoken by several women selling vegetables at a morning market, whom I met during a recent trip to the lower Lancang River. The market was at Biao Cun, a township by the river. The township and its nearby villages would all be inundated by the Miaowei Dam reservoir, which China plans to build by 2016.

China plans to build and operate ten additional dams on the Lancang River as part of its 12th Five Year Energy Plan. If all are built, more than 30,000 people will be relocated away from their ancestral lands. 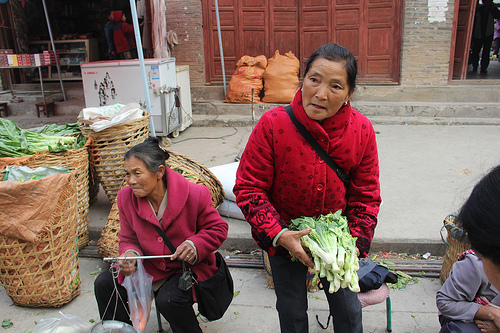 Resettlement along the Lancang has a long history, starting with Manwan Dam whose first phase was finished in the 1995, to Nuozhadu, which started filling its reservoir last year, to Miaowei, which will be finished in 2016. The mighty river has been tamed into a series of reservoirs, and unfortunately, the same story of community loss, impoverishment and broken social capital continues.

In 2002, Goldman Price recipient Dr. Yu Xiaogang from Green Watershed conducted a social impact assessment at Tianba village near Manwan. Located right above the reservoir of the dam, villagers from Tianba have had to move multiple times, often settling in temporary shacks adjacent to the trash field of Manwan, where all the domestic wastes of Manwan workers were dumped. Having lost access to their farmlands, children and adults from Tianba spent long days wandering in the trash field, looking for useful pieces they could sell for a little income. In 2003, the village leader called himself a “trash village leader,” because he was so embarrassed by the poverty of his community.

Dr. Yu’s research reached the central government in China, who agreed that the provincial government of Yunnan should allocate an extra 70 million RMB, to improve the lives of people resettled from Manwan. When we visited this March, the trash field has turned into a soccer field for Manwan workers, and only three or four households remain living in Tianba village. The rest have moved away into houses that were built with the allocated 70 million RMB. We followed the instruction of the Tianba families and visited the newly-built village, and were surprised to find mostly women residents. Most of the men have left for jobs in the cities, while women stayed to finish the construction of their new houses and took charge of village affairs. The villagers still recalled the four to five times that they had to move and their days spent on the trash field. Although they now at last have permanent homes, they still do not feel happy or secure in their daily lives. Most families have gone into debt for several tens of thousands of yuan after constructing their houses. Because their household registrations still remain in their hometown, they are not allowed to receive subsistence allowances from their local government and their children were are discriminated against at in their new schools. 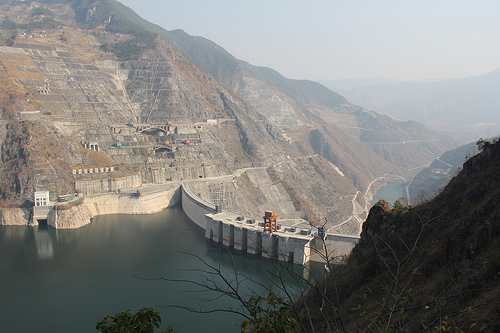 Xiaowan Dam, finished in 2010, was one of the tallest dams (292 meters) in the world. It has also resulted in the largest resettlement population among the Lancang Dams. Very close to the town of Xiaowan is a resettled village that moved here in 2004. The houses were built by the government and used poor quality materials, which resulted in leaking and cracking of the walls, but villagers had to pay more than 520 RMB/square meters, whereas they only received 230-250 RMB/square meters for their old house as compensation. There were no animal barns as promised and land was also of poorer quality. Driving one hour north of Xiaowan on unpaved roads brings you to the resettlement village of Datuan. People moved here in 2010 and many of them are still finishing the construction of their houses. The Vice-Village Head Bi Zhenglei explained that their biggest concerns are road accessibility and economic development opportunities.

Near Xiaowan Dam, a sixty-year-old man from Xiaozhai village told us that villagers have blocked the road several times in protest against unfair compensation and corruption in the resettlement process. In particular, villagers were frustrated that they had received much less compensation that they thought their previous paddy fields and land were worth. On our way to the Gongguoqiao Dam site, I met some women from Luzhuang working along the road, who told me that during this past Chinese New Year, they met officials who warned them about the consequences of continuous protest, but they planned to continue the resistance as long as their grievances were not resolved. In 2010, several hundred people from Daxing Village two hours from the dam had protested in front of the Fengqing Country government office for four days, but had received no response. 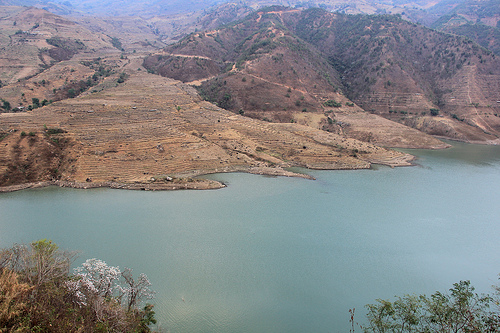 Some of the villagers work for Huaneng Lancang Hydropower Company, the main builder of the Lancang dams, but most are employed as unskilled laborers, such as janitors and day laborers at the dam site. Even these jobs require a middle school education, thus excluding a large number of local people. With no job prospects, young people spend their days gambling. Many resettled villages look exactly the same, with rows of empty shiny houses, mahjong playing women and men, and empty storefronts.

However, some villagers are happy about the move, the closer proximity to schools and towns. Near the Nuozhadu Dam, we also met resettled villagers who started successful small businesses catering to tourists visiting the area.

Thanks to the Lancang River, abundant water, a variety of fish, and well-irrigated crops and lands have enabled generations of river communities to thrive. After the dams were built, resettled villages have often faced limited access to natural resources and broken social capital. Families that used to have hundreds of hectares of land now only have some arid land that is barely arable. Water quality is also a big problem. In Ganlanqing village where communities resettled by the Dachaoshan Dam now live, unclean water has brought kidney disease to more than half of the village’s population. With no more access to forests, herbs, or other economical products such as caterpillar fungus and matsutake mushrooms, families have lost the ability to diversity their income. “Now we just wait for rain to grow some corn, but it hasn’t rained much in the past four years,” say farmers from Ganlanqing, referring to the severe four-year drought in Yunnan province. 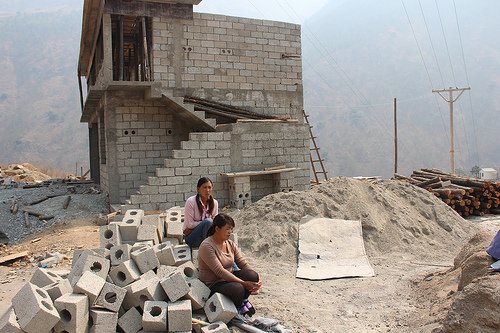 An unfinished home along the Lancang River
International Rivers

In the resettled villages, families do not know each other well, as two or more villages may be concentrated in a single resettlement village. With their heavy financial debt, families are under extreme pressure to make a living. Large families were also broken apart during the move to different villages, making it hard for relatives to visit each other and maintain their family and community connections. A woman from Daxing told us that she still felt like that she was visiting relatives in the new village, as she misses home. After four years of constant movement, she is still not used to her new life.

Dams and resettlement have helped accelerate urbanization, as cities such as Lancang, Jinghong and Lincang are anticipating rapid economic growth and building scores of high-rise buildings. Jinghong city’s neon lights sprawls along the Lancang River at night. In sharp contrast, the township of Xiaowan is now quite run-down, with closed shops and abandoned businesses from the days when the township was populated with construction workers.

However, rather than being lifted out of poverty as the local government has promised, many poor people have been further marginalized by the process of dam building. We met a family that moved twice because of road and dam construction. No one in the family has gone to school. When they moved because of the dams, they did not understand any of the land or housing compensation policies. With a sick daughter and three jobless sons-in-law, the family despaired about their future.

Most resettled families we visited have family members trying to find jobs in a nearby county or city. Those who have access to major roads try to set up small businesses such as restaurants and hotels. However, many villagers, especially women who only went through primary education and lack the skills to find a good job, stay at home and fill their days playing mahjong and watching television.

If all the planned dams in China’s 12th and 13th Five Year Plans go forward, the Lancang stories will repeat themselves along all major rivers in southwest China. Most of the communities are ethnic minorities who hold traditional beliefs about their land and culture. The social and cultural impact of the biggest dam-boom in the history of the world will not only result in dying rivers, but also communities who suffer from loss of livelihood and resources, broken social capital and opportunities to voice their own grievances. However, the question still remains whether these communities will accept this fate, or whether they will break the silence and fight for themselves and their rights.

View a slideshow of photos from the field visit: