AUGUST 26, 2019: Renowned indigenous leader Raoni Metuktire of the Kayapó people delivered to French President Emmanuel Macron today a joint statement signed by 62 Brazilian civil society organizations and networks, together with international allies, attributing a rapid escalation of Amazonian fires to the dismantling of environmental policy by the government of President Jair Bolsonaro. The document also calls on the G7 countries to ensure effective mechanisms to prevent imports of Brazilian commodities produced in areas characterized by recent deforestation and human rights violations. 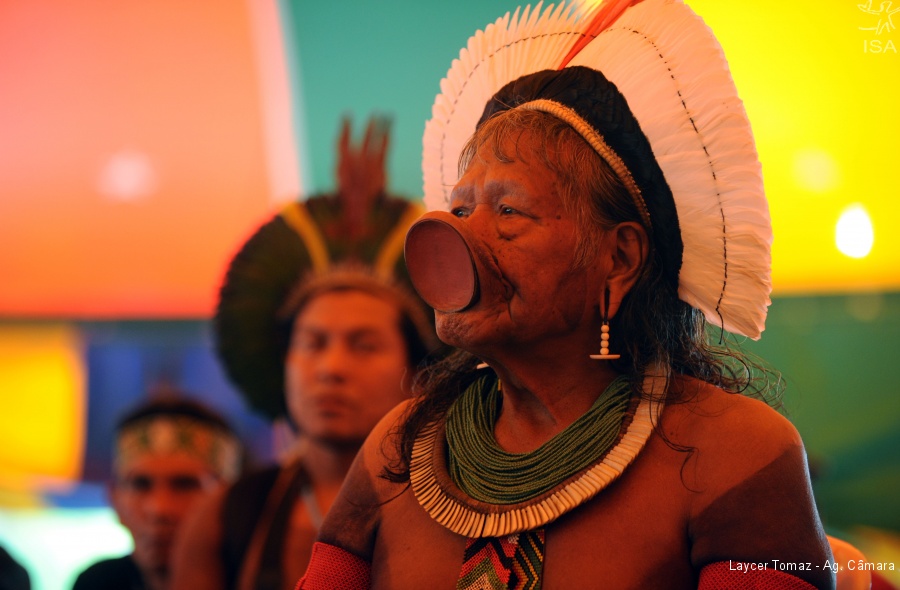 The meeting between the Brazilian leader and the French president took place in Biarritz, France, following the G7 meeting. During the meeting, leaders of the world’s wealthiest nations announced a USD $20 million Amazon protection fund, which includes reforestation.

The declaration from the civil society groups states that the problems of burning and deforestation are longstanding, but severely worsened in 2019 as “a direct result of Jair Bolsonaro’s behavior.” The president has promoted “the systematic and deliberate dismantling of the operational capacity of the federal environmental agency, IBAMA and other agencies responsible for controlling illegal acts of land grabbing, deforestation and burning, logging and mining,” while making public statements that signal impunity for environmental crimes, according to the letter.

“Bolsonaro is the main mentor of the problems that are happening in Brazil,” Raoni told reporters after meeting with Macron. “Bolsonaro’s position encourages farmers to set the fires because they feel supported by a head of state.”

The civil society organizations are demanding the Brazilian government adopt five measures, including a moratorium on legislative projects that imply environmental setbacks, which will be discussed this week by former environment ministers with the mayor, and effective support for actions against environmental crime led by IBAMA.

Other demanded measures include the “elimination of obstacles to the demarcation of indigenous territories, as well as recognition of the territorial rights of quilombola communities and other traditional populations,” a “re-creation of the steering committee and resumption of activities of the Amazon Fund,” and “resumption of the Action Plan for Prevention and Control of Deforestation in the Amazon and adjacent savannahs (cerrado) – currently abandoned by the Government – with adequate financial resources, transparency and participation of federated entities and civil society.”

With regard to the G-7 member countries, the signatories demanded, in addition to more stringent controls over the origin of imported commodities, the adoption of effective due diligence policies to avoid investments by companies and financial institutions in Amazonian projects that involve high risks of human rights violations and environmental damage.

Finally, the document recommends that “in the case of an effective change in the Bolsonaro government’s posture,” that G-7 countries “contribute to the efforts of the government and society to deal with deforestation and burning in the Amazon, with the means of implementation needed to achieve climate change policies in line with the 1.5° C goal of the Paris Agreement.”

According to Brent Millikan of International Rivers, one of the co-signing organizations of the declaration: ”At the G7 meeting in Biarritz, deforestation and burning in the Amazon – despite having been included in the agenda as an emergency issue – apparently received very little attention. An ambitious proposal to cooperate with Brazil and neighboring countries to address the grave problem did not emerge. President Macron’s meeting with Cacique Raoni was significant in that it allowed for the voicing of concerns of indigenous peoples of the Amazon, while presenting a joint declaration signed by more than 50 civil society organizations that discusses both underlying causes and solutions for the crisis of deforestation and burning in the Amazon, taking into account the responsibilities of both the Brazilian government and G7 countries.”

Read the joint declaration in English and Portuguese.

See the original Portuguese version of this press release here

Watch below a short statement from Chief Raoni about the crisis of deforestation and burning in the Amazon: