Skip to content
First published on 09.06.2014
This resource has been tagged as a Press Release

“This is the right move and an import step toward putting Chile on track toward a sustainable, clean energy future,” said Amanda Maxwell, Latin America Project Director at the Natural Resources Defense Council. “Patagonia’s rugged and varied wilderness is truly an environmental treasure. These giant dams would have put at risk the wilderness, traditional culture, and local tourism economy of this remarkable region. The country’s future energy needs are better served by building truly sustainable energy: renewables and energy efficiency.”

Chile’s Patagonia region is one of the world’s last vast expanses of wilderness and the HidroAysén project has been the center of an eight-year environmental campaign waged by the Patagonia Defense Council, a coalition of nearly seventy Chilean and international organizations, including the Natural Resources Defense Council (NRDC) and International Rivers. They hailed the decision to cancel the massive hydroelectric scheme as a landmark for the country.

The Committee of Ministers overturned environmental permits for the dams that were originally granted in 2011 under an evaluation process full of procedural irregularities and charges of misconduct. “This decision is in line with what we’ve always said: HidroAysén’s impacts could not be mitigated, and in fact could not be evaluated.” explained Juan Pablo Orrego, International Coordinator of the Patagonia Defense Council (PDC). 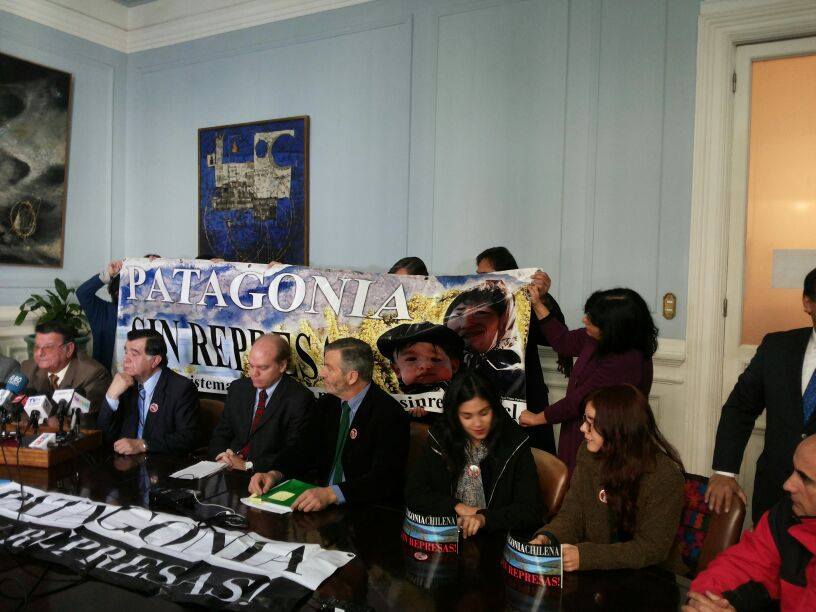 Press Conference on June 9 with Senators and leaders of Patagonia Sin Represas.
Photo by Ecosistemas

According to Patricio Rodrigo, Executive Secretary of the PDC, “The government’s definitive rejection of the HidroAysén project is not only the greatest triumph of the environmental movement in Chile, but marks a turning point, where an empowered public demands to be heard and to participate in the decisions that affect their environment and lives.”

By ruling against HidroAysén, the government sided with the majority of Chileans, and tens of thousands of people around the world, who believe that large dams should not be built in Chile’s Patagonia, and are incompatible with the idea of sustainable development for the region. “This is a tremendous victory for citizens”, notes Patricio Segura of CODESA, a local NGO in Patagonia, “This is one more fundamental step in protecting Patagonia and building a fairer and more sustainable Chile that protects our natural legacy for future generations.”

“When the people demand a full accounting of the costs and benefits of a big dam scheme, we consistently find that projects like HidroAsyén are not economically viable.” said Monti Aguirre, Latin America Coordinator at International Rivers. “The Chilean river movement is galvanized and now is the time to seek more permanent protection for the uniquely wild rivers of Patagonia.”