Skip to content
First published on 01.04.2019
This resource has been tagged as a Blog 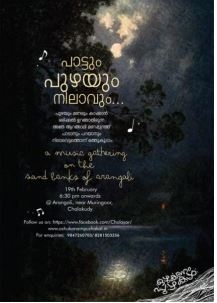 A red moon rose above a tranquil river in Arangali village in Kerala. People had begun trickling in to the sand banks for an event called “The Song, the River and the Full Moon.” These sand banks in the lower catchment of the Chalakudy River in Kerala are testimony to the struggles of the local community against years of illegal sand mining. It was not incidental that Arangali’s sand banks were chosen for the music gathering: to celebrate the river and its free flow. And perhaps also to remind us that there is hope when people come together for protecting all that is withering away on this living planet.

The music gathering (the poster for which is to the left) was part of the two-month-long, statewide campaign (22nd January-23rd March 2019) called Ozhukanam Puzhakal (The Rivers Must Flow). There were recitals of sitar, violin, and mridangam, and songs and poems were shared. Long after the musicians had dispersed and the silver moon lay shimmering on the river, some of us sang softly a Native American chant: “We all come from the forest, unto her we shall return, Like a drop of rain, flowing to the ocean.” The following day, students from a local government-run school were taken on a river walk along this stretch of the river in Arangali while they camped for two days at an educational workshop.

The campaign was conceived with the objective of mainstreaming the discourse on rivers, water management, and water security at a time when Kerala is being approached by a severe drought after the devastating floods of August 2018. It is also timed to commemorate the first death anniversary of Dr. Latha Anantha, a name familiar to a lot of us. She spent a lifetime working at the grassroots mobilizing indigenous people against a proposed dam, as well as engaging at the national policy level on issues concerning rivers and the conservation of Western Ghats. Earlier in November 2018, ‘Friends of Latha’ – a virtual group of her comrades across the country – held a National Workshop on the “Learnings from Kerala Floods for River Rejuvenation and Management and Water Related Disasters in the Context of Climate Change.”

The campaign was kick started in the Meenachil River Basin in January 2019. Kerala’s cherished poet Professor Madhusoodanan Nair spoke at the opening session, sharing fond reminiscences of his childhood bond with the Neyyar River in south Kerala. He lamented on how the present generation has no direct relation with the river and that is probably why mineral water bottles are all we know about freshwater. The event was hosted by Meenachil Nadee Samrakshana Samithi. Their work in the region has influenced policy level change in the government’s approach to wetland and river management. In appreciation of their efforts, they were awarded the Bhagirath Prayas Samman in 2017. 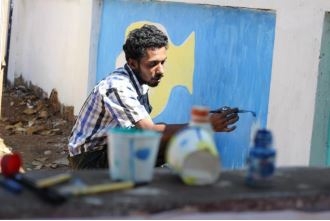 The campaign then catapulted as quickly as it had to: poster exhibitions and seminars were held in Pala and Chalakudy Towns; graffiti work by artists like Ganesh Anchal (right) carried out with messages of river and water conservation on public walls in Chalakudy Town; and there were events at colleges and public spaces across Kerala. More river walks, like the one on the Arangali sand banks, brought together school children and adults, making the river a more tangible experience; we walked in Annanad along Chalakudy River, in Idukki along the Azhutha Stream, and near Thommankutthu Waterfalls in Idukki.

Marian College Kuttikanam students did a clean-up and public awareness drive against waste dumping at the origin of the Azhutha Stream. There was a River Parliament mock session at Pala college that made an effort to get students to understand the brass tacks of river management at the governance level. A painting competition titled ‘Jalarekhakal,’ organized by Tree Walk in the capital city of Trivandrum, brought in over 100 children from various schools around the Vellayani Lake. On World Wetlands Day (2nd February), there were coracles and barrows and a stream of enthusiastic cleaners on the Vellayani Lake. Two interesting groups partnered with the Neerthadakam Group at this event – the Indus Cycling Embassy (ICE) and Silent Wheels; they offered cycles at Competition Prize and discounted rates to students. 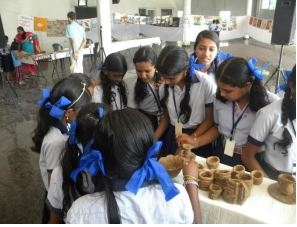 One of the highlights of the Chalakudy Exhibition were the sand art and clay models created by children from Chalakudy’s schools as part of the post-flood creative exercise carried out in September 2018. After the August floods that hit Kerala, the Schools for River program of the River Research Centre with the help of eight artists from across India, had organized 20 workshops for children on soil art, installations from nature, drawing, clay pottery, natural colour making and drawing, sessions on dance movement therapy and theatre workshops. While the workshops were aimed at addressing the emotional trauma each child may have undergone during the floods, a great part of the emphasis was on experiential knowledge – in terms of collective encounters on possibilities in nature, including what can be taken away from the natural calamities. For instance, children were shown how to make clay from the alluvial soil deposited after the floods, to learn to appreciate that nature can bring beautiful things even with a disaster.

A series of other events and meetings dotted the month of February– the Kole Lands Fish Survey (1st Feb, the Wetland Seminar at the Forestry College, Kerala Agricultural University (2nd Feb), the Convention on protecting the Kabini River and its tributaries (16th Feb), a gathering along Iruvanji Puzha – a tributary of the Chaliyar River (20thFeb).

Speaking of rivers would indeed be indequate without the element of poetry. As dusk enveloped the banks of the Shokanashini stream in Chittoor Village of Palakkad, birds chirped and poets tuned in. Rafiq Ahmed, PN Gopikrishnan, P. Raman, Jyoti bai Pariyadath and Anwar Ali recited nostalgic writings close to their hearts. Well-known human rights activist and an undying voice of indigenous people, Daya Bai from Kasargod, was the special guest that evening. Anwar Ali’s words were carved to fit the campaign theme, “Let obstacles break down, and let the rivers sing.” As if echoing the spirit of the river in Chitoor and Arangali, a few more musicians and poets met at Moozhikkulam Sala on the banks of Chalakudy River, towards the end of the campaign.

A day after International Water Day, the campaign’s first phase came to an end in Eloor. Eloor is where the industrial stretch of the Periyar River was declared a toxic hotspot by Greenepeace. The river summit was attended by crusaders of river protection from all over Kerala. A draft “Policy on River Basin Management and Rejuvenation” was read out. In its essence lay the river basin approach to ensuring flows, for the sake of rivers and all that is dependent on it.

The campaign has come as a lesson on the strength of combined effort: there was motivation and support from several NGO partners, grassroots groups, as well as the Forest Department. Prof. Madhav Gadgil, the name that is synonymous to community- based conservation in the Western Ghats, was able to join us at a seminar in Thrissur Town. He offered a glimpse of the history of anthropogenic disturbance in the Western Ghats to lend perspective to the development paradigm facing post-flood Kerala. Former State Forest Minister Mr. Binoy Vishwam was present at the poster exhibition in Chalakudy Town Hall. He reminded the audience that “to flow is the inherent right of a River, and the floods demonstrated what havoc can be wrought when her flow is disrupted through human interference.”

By no means can the campaign be considered completed. In fact it is a prelude to action through policy and advocacy interface for a plethora of river and water related issues in the state. In all of the campaign events, there was a sense of commitment and eagerness to change the way things are: a coming together of passionate individuals and groups, of seeking new possibilities, and strategies, and forming new alliances for future crusades. 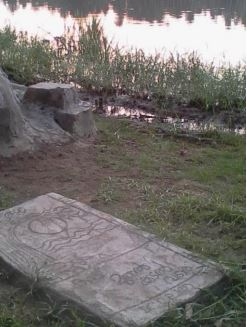 Moozhikkulam Sala is a place built in the effort of recapturing a village university, with its roots in the philosophy of protecting and celebrating the earth and its human cultures. An engraving of Dr. Latha’s book titled “From the forest to the Sea” is set on their campus on the banks of the Chalakudy River. Her legacy lives on.