Skip to content
First published on 17.03.2020
This resource has been tagged as an Action

This March 14, International Day of Action for Rivers, thousands of river stewards, defenders, and allies took action both in person and online. Despite the health and safety challenges faced by many countries around the world with the COVID-19 pandemic, over 50 direct actions were registered across 23 countries/nation-states with hundreds more joining in via social media and digital outreach. 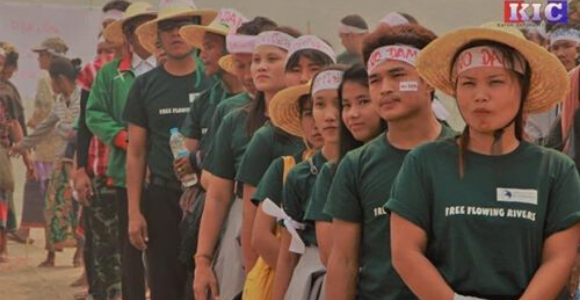 We cannot express our gratitude for these river defenders and stewards enough. In this time of collective uncertainty, they remind us of exactly what is needed – a vision for a healthy future. One in which human and natural life are joined by principles of reciprocity and respect. Where our water sources are protected as our lifeblood. And where the voices of indigenous, and local communities, women, and other marginalized groups are at the forefront. The outpouring of solidarity with #RiversUniteUs during this time is testament to the commitment of so many communities and individuals around the world protecting our vital freshwater.

In a time of change and uncertainty, we can find strength in joining collective action and supporting this movement. We can build the bigger transformations we want to see for our planet, and confront the challenges ahead together.

In that spirit, we hope you enjoy these 2020 Day of Action for Rivers highlights below, and wish you and the rest of our global river community health and strength during these times.

Groups indigenous to the Salween River basin in Myanmar joined together in solidarity for a protected and free-flowing Salween River. The Salween is the last free-flowing river in Asia and currently threatened by numerous plans to build dams on the mainstream and its tributaries, which would displace local peoples and destroy their livelihoods and cultures. This March 14, thousands of ethnic people including ethnic Kachin, Chin, Shan, Ta’ang, P’Oo, Karenni, Arakan, Karen, and Mon gathered on the bank of the Salween River in Karen State. For many groups it was the first time they attended such an inter-ethnic gathering calling for the free-flowing Salween River. For more photos visit KESAN on Facebook.

The Brazilian Movement of Dam Affected Peoples (MAB) organized a seminar entitled “Atingidos por Barragens em luta por Direitos, pela Água, pelos Rios e pela Vida” (Dam Affected Peoples in the Struggle for Rights, Water, Rivers and Life). The event took place in Belém, capital of the state of Pará, where the notorious Belo Monte and Tucurui dams are located, among others. The seminar was followed with a street demonstration in Belém that involved protests against both hydroelectric and mining dams, and the exorbitant cost of electricity paid by the urban poor and rural inhabitants, including groups directly affected/displaced  by hydroelectric dams. For more information (in Portuguese) visit MAB’s website.

In Washington State, the Department of Ecology is considering an unprecedented move to weaken water quality standards on the Spokane River. If successful, this could send a dangerous message to other states and to the world about devaluing our river and water protections. Spokane River Keeper called on all allies to sign their petition to tell Washington State to reject the weakening of water quality standards. Sign the petition here.

The School of Energy Justice of Chiapas and Guatemala, and Popular Front in Defense of Soconusco in Aacacoyagua, Chiapas came together to present an offering to the Cacaluta River and to demand respect for their rights and self-determination as indigenous peoples, with this message:

A workshop and action in support of free-flowing rivers in Manipur was organized by CRAM, Citizen Concern for Dams and Development (CCDD), and local village authorities in Tengnoupal district. The area is currently under threat by a variety of dam and industrial projects. For more information visit the news article covering the action.

Green-Globe, a community based organization in Nairobi dedicated to #BeatPlasticPollution in Kenya, participated in a river clean up on the Mbagathi River.

A hundred defenders of rivers and ecosystems, representatives of organizations and communities across the country, met for three days in Alto Bíobío, Wallmapu, a territory emblematic of resistance movements for the protection of ancestral culture. This was the ninth meeting of the Rios Libres Network in Chile, a group that for five years has advanced protection of the country’s river basins and the communities that depend on them. For more information (in Spanish), visit the news article covering the gathering.